Affordable Quality Healthcare for All

The mission of WindRose Health Network (WHN) is to improve the health of both its patients and the communities it serves by providing high-quality, family-oriented, primary and preventive health care services, with a particular emphasis on helping the poor, the medically underserved and vulnerable residents. As a Federally Qualified Health Center, WHN accepts all people regardless of ability to pay and helps patients overcome language, economic, cultural and geographical barriers to obtaining health care services for themselves and for their families.

Windrose Health Network (WHN) launched in the Fall of 1996 as a Rural Health Center in Trafalgar, Indiana. Leaders from the community and Johnson Memorial Health wanted to create an access point for primary medical care services for people in southern Johnson County.

A second Rural Health Center was opened in a high-need area of Edinburgh, Indiana.

WHN officially became a Federally Qualified Health Center. With grant support from the Bureau of Primary Health Care, WHN continued to grow and served about 5,700 patients in 2004.

At the request of community leaders in Hope, WHN opened a small clinic, the first local medical provider in more than 20 years.

WHN noticed that large numbers of patients were coming from Greenwood and Indianapolis. As a result, leaders opened a fourth health center on the South Side of Indianapolis, which quickly grew to become its largest and most diverse.

Responding to a growing physician shortage in the town of Franklin, WHN relocated its Edinburgh practice to a larger, fully renovated facility in Franklin.

WHN employed more than 150 healthcare professionals, including 28 clinicians, and served over 20,000 patients across six sites of care. Health Center locations include Trafalgar, Whiteland, Franklin, Hope and the Southside of Indianapolis.

After undergoing seven years of extensive growth at the Southside Indianapolis location, WHN divided the practice into two sites of care. One Health Center was opened near Community Hospital South and the second Health Center at Epler Parke in the plaza area at the intersection of Epler Road and US 31.

In partnership with Johnson Memorial Health, WHN opened a pediatric clinic in Whiteland. Presently, WHN employs more than 150 people – – including 28 clinicians – – and serves over 20,000 patients n Trafalgar, Whiteland, Franklin, Hope, and the South Side of Indianapolis.

The Edinburgh Center facility underwent a renovation and was scheduled to reopen later that winter but was delayed due to the COVID-19 pandemic.

A 38-foot mobile unit was purchased in response to the worldwide COVID-19 pandemic to address the Coronavirus outbreak and provide mobile COVID-19 testing throughout the community. Furthermore, telehealth services were established to ensure patients had virtual access to care.

WHN employs more than 175 healthcare professionals, including 36 providers on staff, and serves more than 20,000 patients across six sites of care. In addition, the mobile unit was deployed as a mass vaccination unit for COVID-19 in the late winter/early spring. This year marks 25 years of serving its mission and providing high-quality care throughout the community.

WindRose Health Network is a catalyst for health, wellness, and positive change for the residents and communities within its service area, as well as a leader in enhancing the quality of life in Indiana. 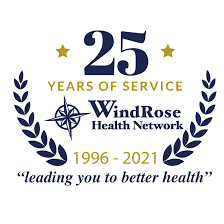